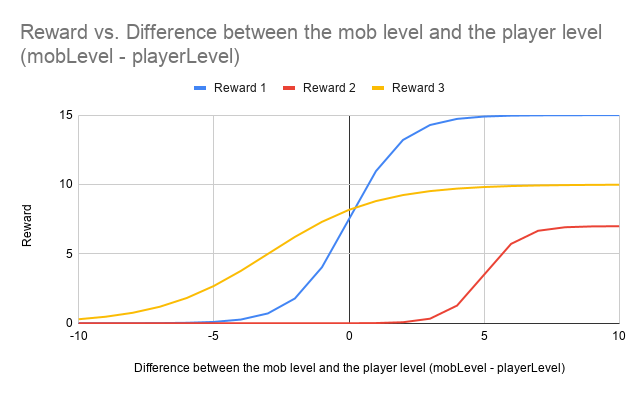 When we have an open world MMO, it’s crucial to be on top of its virtual game economy. It’s human nature to try to exploit the system, and your players will test the limits that you build for your world.

The sigmoid (also known as the logistic function) is an ally when it comes to balancing our games, especially when preventing players from engaging in behaviors that will harm the game economy. The target audience for this is product people and game designers who sometimes feel that they lack the mathematical tools they need to implement their vision.

Why should we use this mathematical tool to balance the rewards given each level in a game economy?

By balancing our games with the logistic function we achieve these two effects:

Logistic Function to the Rescue!

The sigmoid or logistic function looks like the chart below.

The mathematical formula for the logistic function is:

is the maximum value that the function will reach.

is the value at which the function will reach half

If you want to simulate this function on excel, you can use the following formula:

Define game rewards based on the difficulty of a challenge

The next step is to use this function to achieve the two goals we defined previously:

The difference between the mob/monster level and the player level will be our x, which we’ll use to determine rewards based on the difficulty of the encounter

In the image above, we use a spreadsheet program to simulate our reward function using different parameters: Scenario 1 (blue), Scenario 2 (red), Scenario 3 (yellow).

Then, it’s time to plot the results. We do this so that we can see the shape of the curves and reason about them.

Scenario 3 shows a function where the maximum reward is 15. Scenario 2 converges to its top reward the quickest, even though it has a slow start.

There are a lot of possibilities where the use of this function combined with some creativity can help solve in-game challenges. There’s a lot more that can be said about this function. As a tease, this function has a close relationship with the gaussian function better known by its bell curve and the normal probability distribution.

Feel free to make a copy of my simulation spreadsheet: https://docs.google.com/spreadsheets/d/1UMkbq6ItposrehjqugMFsoH9i-ZVRXnkib9F6Rckpm0/edit?usp=sharing

All about the logistic function, on Wolfram Alpha: https://www.wolframalpha.com/input/?i=logistic%20function

PS – Would you like to see more articles about this topic let me know in the comments below. If you would like me to do a workshop or a talk at your organization get in touch.

We use cookies on our website to give you the most relevant experience by remembering your preferences and repeat visits. By clicking “Accept”, you consent to the use of ALL the cookies.
Do not sell my personal information.
Cookie SettingsAccept
Manage consent

This website uses cookies to improve your experience while you navigate through the website. Out of these, the cookies that are categorized as necessary are stored on your browser as they are essential for the working of basic functionalities of the website. We also use third-party cookies that help us analyze and understand how you use this website. These cookies will be stored in your browser only with your consent. You also have the option to opt-out of these cookies. But opting out of some of these cookies may affect your browsing experience.
Necessary Always Enabled
Necessary cookies are absolutely essential for the website to function properly. These cookies ensure basic functionalities and security features of the website, anonymously.
Functional
Functional cookies help to perform certain functionalities like sharing the content of the website on social media platforms, collect feedbacks, and other third-party features.
Performance
Performance cookies are used to understand and analyze the key performance indexes of the website which helps in delivering a better user experience for the visitors.
Analytics
Analytical cookies are used to understand how visitors interact with the website. These cookies help provide information on metrics the number of visitors, bounce rate, traffic source, etc.
Advertisement
Advertisement cookies are used to provide visitors with relevant ads and marketing campaigns. These cookies track visitors across websites and collect information to provide customized ads.
Others
Other uncategorized cookies are those that are being analyzed and have not been classified into a category as yet.
SAVE & ACCEPT