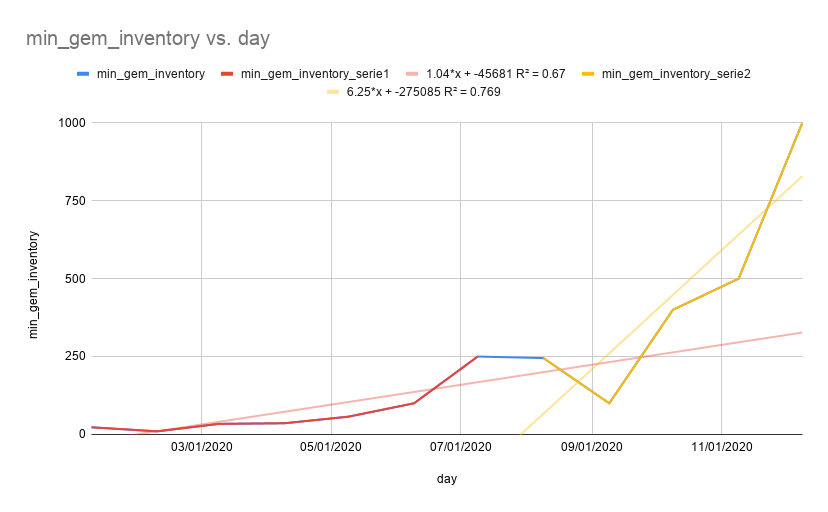 We all know that inflation in a game economy can cause a lot of problems. Among which:

This article is aimed at giving product people the tools needed to monitor inflation, deflation, and equilibria in their games.

It all starts with good analytics tracking of game metrics. https://andersdrachen.files.wordpress.com/2013/07/02drachenetal02.pdf

In order to monitor inflation, we start by listing the game currencies and items that players can accumulate, for example:

We gather these metrics on a database maybe with a structure similar to the one below.

The next step is to gather the data in order to analyze inflation. For this step, we query the database where the player data is stored and aggregate the minimum number of gems (or other currency), that the player held during the day. This number gives us a baseline for the lowest amount that the account saw that day. After we aggregate that minimum amount per player per day, it’s time to see what is the average minimum number of gems for that day. The SQL code snippet below can give us an idea of how to accomplish that task.

After we query our data, the simplest method for product people is to get a CSV and import it to a spreadsheet, like on the sample below.

After getting the data on a table like the one above the next step is to plot a chart of the currency vs. the day. So, on the x-axis, we plot the day or the time series and on the y-axis our variable that we want to monitor.

We start by plotting the min_gem_inventory with a blue line. We can see that there seem to be two different periods with the naked eye. At first, we see slow growth until the 7th. Then, a rapid growth period ensues. If this would be real data, probably around the 8th we introduced an update that affected the number of resources that players could get.

Given these two different periods, we plot 2 new series with the days where we see the different behaviors (red and yellow data). From here, we add a trendline with the linear option.

This trendline will create a linear regression of the type y = a x + b . The a coefficient indicates the slope, the greater the number the higher the inflation. The a coefitient also gives us the inflation rate. In our example, during the red period, the players’ gem inventory expands at an average rate of 1.04 gems per day, after the game update that value changed to 6.25 gems per day.

If we’re able to track the evolution of the players’ wallets over time, then with simple linear regressions, we’re able to draw a lot of conclusions about the game economy.

If the slope of the linear trend line is greater than 0, then, we have some inflation. If the line moves mostly sideways, there’s an equilibrium. Game economies are dynamic. Often, there’s a need to correlate progression with access to resources. Therefore, equilibria are rare in games.

When the slope goes down, there’s a deflationary period. Good games can find ways of mitigating inflation by adopting strategies that introduce sinks for currencies (places where players spend currencies and make them disappear from the game economy).

PS – This is a high-level article. If you like the way that I approach these subjects, feel free to comment and get in touch. If you have any ideas of topics that you would like to see covered, let me know. I could spend a whole day just talking about empowering game dev teams with data-driven insights non-stop. All the best, Daniela.

We use cookies on our website to give you the most relevant experience by remembering your preferences and repeat visits. By clicking “Accept”, you consent to the use of ALL the cookies.
Do not sell my personal information.
Cookie SettingsAccept
Manage consent

This website uses cookies to improve your experience while you navigate through the website. Out of these, the cookies that are categorized as necessary are stored on your browser as they are essential for the working of basic functionalities of the website. We also use third-party cookies that help us analyze and understand how you use this website. These cookies will be stored in your browser only with your consent. You also have the option to opt-out of these cookies. But opting out of some of these cookies may affect your browsing experience.
Necessary Always Enabled
Necessary cookies are absolutely essential for the website to function properly. These cookies ensure basic functionalities and security features of the website, anonymously.
Functional
Functional cookies help to perform certain functionalities like sharing the content of the website on social media platforms, collect feedbacks, and other third-party features.
Performance
Performance cookies are used to understand and analyze the key performance indexes of the website which helps in delivering a better user experience for the visitors.
Analytics
Analytical cookies are used to understand how visitors interact with the website. These cookies help provide information on metrics the number of visitors, bounce rate, traffic source, etc.
Advertisement
Advertisement cookies are used to provide visitors with relevant ads and marketing campaigns. These cookies track visitors across websites and collect information to provide customized ads.
Others
Other uncategorized cookies are those that are being analyzed and have not been classified into a category as yet.
SAVE & ACCEPT